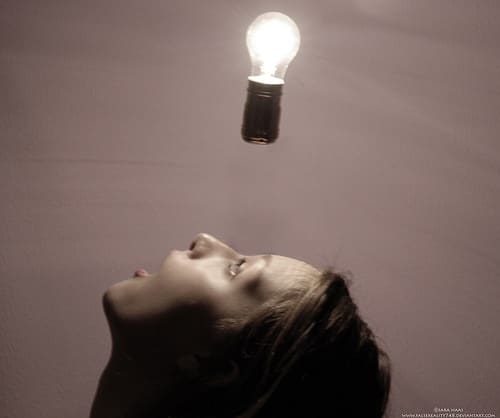 When we fall asleep the working memory network, the connections in the brain that allow us to pay attention to the world around us, goes to sleep also and a network we have just recently discovered takes over, the default mode network.  It’s like a car sitting at idle, but the engine is still running.  The default mode network is important, it involves dreams, imagination, how we see ourselves, the ability to have perspective on things.  Those with higher default mode network activity while at rest have more daydreams because it involves our “stream of consciousness” type of thought.  When we wake up, the working memory network restarts and the default mode network retires into the background.  They don’t operate at the same time, which is important because it allows us to distinguish between the fantasy of our inner stream of consciousness and the reality of the external world.

At least that’s true for most people.  Creative people it seems have an overactive default mode network and the ability to engage both at the same time, which allows them to access their “inner stream” while using their working memory network to control their attention. The key to creativity, then, seems to be the ability to keep one’s internal stream of consciousness “on call” while being able to concentrate on a task.

And then there is the issue of latent inhibition, the ability to consider something as relevant even if it was previously categorized as irrelevant, looking at something as novel no matter how many times we’ve seen it before.  This sounds suspiciously like distractibility, reexamining things we’ve seen before sounds like a waste of time.  But it’s not that people with a reduced latent inhibition always treat the irrelevant as relevant, just that they consider everything as potentially relevant.  This is conducive to creativity because sometimes the seemingly irrelevant is actual relevant.  To be creative we must be open to everything in our environment and also be tuned in to our own internal stream of consciousness.

Carolyn Gregoire wrote a fascinating piece in the Huffington Post about Charles Darwin’s “Aha” moment when writing On the Origin of the Species.  He had read a book written decades earlier on population growth and resource competition and saw the connection to what he had seen in the Galapagos Islands.  That insightful connection led to his theory of natural selection.

“Darwin reads this book and says, ‘Wow, that’s it!’ That exemplifies the ‘aha!’ of getting the new piece of information, and seeing the implication and seeing how it fits,” cognitive psychologist Gary Klein, author of Seeing What Others Don’t: The Remarkable Ways We Gain Insights, tells The Huffington Post. “That was an unexpected shift in his understanding.”

What can we do to promote and control our own access to those kind of creative insights?   Can we train our brains to have more connections within our different ways of perceiving the world? To see things that other may not notice?

She outlines five things you should know about insight and ways to bring more “aha” moments to  your life.

Being curious is the best way to become more insightful, says Klein, and a lack of insight often comes from being in a passive and disinterested state of mind.

“Curiosity is another engine of insight,” says Klein. “People who get insights see something that’s a little bit off, and instead of ignoring it, they’re curious about it. Curiosity keeps our mind engaged to work out the implications.”

A 2012 psychological study found that daydreaming — passive though it may seem — actually involves a very active brain state, which is why the wandering mind can sometimes stumble upon brilliant insights and sudden connections. The researchers credit this phenomenon to the fact that daydreaming correlates with our ability to recall information in the face of distractions. Recent neuroscience research has also found that daydreaming involves the same brain processes involved in imagination and creativity.

“I worry about people who spend all their empty time when they’re not in conversations listening to music or podcasts or things like that, and not leaving any space to just daydream,” says Klein.

“Be more alert to anomalies,” Klein says, “rather than quickly explaining them away and staying in your comfort zone.”

We tend to ignore coincidences or not think much of them, because they’re often meaningless, says Klein. But looking for coincidences is a powerful way to make surprising connections.

“There’s a belief that correlation doesn’t imply causality, which is true. People see all sorts of correlations in coincides that turn out to be spurious, so they get a bad reputation,” Klein says. “But in my work I find that a lot of insights are fed by people spotting coincidences and making assumptions, and instead of just saying ‘It must be true,’ doing to follow-up work to find out if it’s true.”

Insights can occur when we encounter ideas that don’t make sense to us.

Questioning contradictions is another path to epiphanies. Whereas curiosity makes us wonder, contradiction causes us to doubt — and it can be another powerful way to gain insights.

“Our tendency when we hit a contradiction that involves things we believe we understand well is to say, ‘Well, that must an anomaly.’ We have a marvelous set of techniques for explaining away inconvenient facts,” says Klein. “The contradiction only leads to an insight when people take it seriously enough to explore it a bit.”

Act on your insights.

Daydreaming isn’t the only state of mind that can lead to insights.

“I’ve found a number of examples where people were under tremendous pressure and came up with marvelous insights,” says Klein. “We should embrace urgency.”

This urgency forces people to look at things they’d otherwise ignore (what Klein refers to as “creative desperation”), and when they gain an insight, encourages them to act on it right away. This is frequently how chess grand masters try an unusual move that ends up being successful and winning the game for them.

“The problem with too many organizations is that they don’t feel any pressure to act on the insights they’ve had,” says Klein. “They act like they have all the time in the world and then they end up going out of business.”